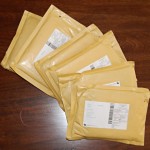 This is how they arrive: all at once in individual packages, individually posted.

And they’re still making money from us. 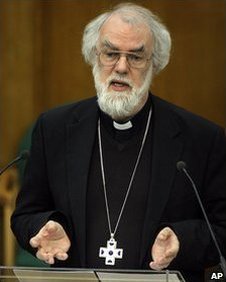 The archbish is the very image of his happy, smiling god

God will not intervene to prevent humanity from causing “immeasurable damage” to the environment, the BBC reports today, quoting top god botherer Rowan Williams, the Archbishop of Canterbury.

“God’s faithfulness stands, assuring us that even in the most appalling disaster love will not let us go – but it will not be a safety net that guarantees a happy ending in this world.”

The gift of free will means, of course, that it is up to us to perform like the trained monkeys god wants us to be, and drink less Coke, burn less petrol and cut down less forest. If we don’t choose to do these things, it’s our problem. On the other hand, even if some people do these things, they’re just going to drown and starve along with everyone else. It’s the sort of fair, merciful, rational argument we’ve come to rely on from this most medieval of institutions. Jesus loves you, just not enough to actually do anything.

It’s difficult to understand the purpose of the archbish’s utterance today. Is it pre-emptive, so that as the last human clubs his brother to death to stand alone on the last remaining peak as the waters rise, the last remaining priest can say “we told you so” as he rows on by to salvation? Do they do this every now and then just in case there’s another war/earthquake/epidemic?

Is it simply to scare the children? Given how most people are ignoring or actively disputing scientific evidence of global warming, perhaps the ruthless mercy of the sandalbashers is the push we all need to shock us into action? But then, do we want to live in a world that’s environmentally friendly only because a man in a dress told us what the fairies want us to do (which, incidentally, seems mostly to revolve around saving enough beasts for us to dominate, and other people for us to convert and enslave).

Is it just the church talking as a worried landowner?

In Hope, Against Hope, For the Glory of God.

It’s hard to understand anything the major religions say, and there is little point arguing with people who base their thinking on fiction, not reason. All we can really do is laugh at their silly frocks, and hope that in the long run this bunch of mentalists will cancel themselves out quietly against all of the others.