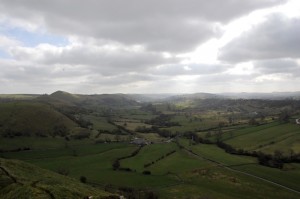 Oh, the endless jokes about peaking too early. Moments of fun! Good thing the weather was nice and, for once, I quite enjoyed scrabbling about the hilltops near Longnor and Glutton, just south of Buxton.

I’d be more specific except it’s the area where my parents live, and dad always gets a bit tetchy during “walker season”. Muttering under his breath, creasing his Telegraph just that bit more fiercely, glancing furtively at the gun cabinet. That sort of thing.

Still, I can provide a few photos and a rough idea of a few fairly simple walking routes we enjoyed.  It was quite liberating really. Even though we didn’t go more than 4 or 5 miles at a time, it was nice just having a rucksack, some water, a bit of emergency money, a mad dog and an OS map and just playing it by ear. 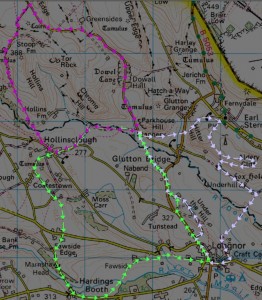 The OS map is the key. I know it sounds obvious but it’s not really because you’re in any significant danger of becoming lost.

It’s more that it gives you the confidence to look for and then use public rights of way that often wend their way through people’s gardens; to stride down unmade roads that just look like someone’s driveway; and to find out whether that short little bit of path that looks quite inviting, somewhere over there, is actually a 1 in 2 hill you might want to avoid.

Route 1 (purple)
We started near Parkhouse Hill. Wend your way past the farm on your left, down across the ford, and onto the road into Hollinsclough. Turn right up a remarkably steep hill, for a mercifully short distance before peeling off to the right down a public footpath into the valley. But then continue up the other side, higher and higher, until you think you’re going to die but the view is quite fine. 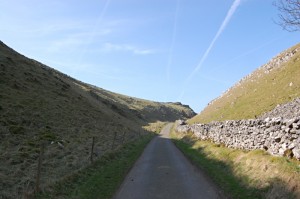 The road back from the cairn

The path continues to Booth Farm, then up again on some tiny roads until you reach a cairn and in our case some rather strange people flying radio controlled aircraft. The road back again is a nice gentle decline through a pretty valley with sheep and hares, until you end up where you started.

Route 2 (green)
This one came about because we wanted to see if the other side of the valley was as high as the bit with the cairn. Same opening as route 1, but in Hollinsclough go straight on instead of turning right. It looks like private land for the first 50 yards or so, but isn’t… you find yourself on a completely bizarre and very painful track that some local maniacs clearly drive down, but is more akin to a giant’s staircase cut from big lumps of rock than any sane notion of a path or road. It hurts like hell to climb (as with all such comments, bear in mind I only quit smoking a few weeks ago and haven’t exercised since 1983). 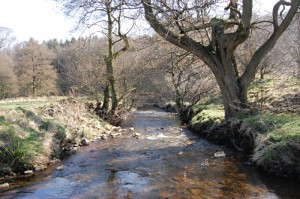 A nice stream, but beware the bog ahead

When you get to the top you’ll want a bit of a rest, before following various footpaths and roads across lots of fields on top of the valley sides, and at least one part where it’s definitely someone’s garden you’re walking through. The fields are a bit more cultivated here, though it’s all relative. Eventually you end up on a road past Hardings Booth, before a nice little sojourn off to the left down a hill, across a stream, through a comedy bog where someone will definitely get stuck, then up the hill again, through a farm and slowly walking through a more shallow valley into Longnor. From there you can follow the roadsigns or more footpaths to return to go. 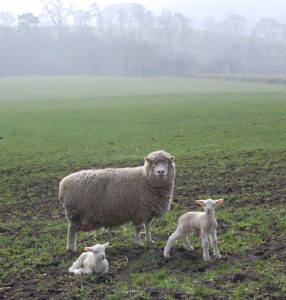 Route 3 (blue)
The final walk headed in the opposite direction, to Earl Sterndale.It followed the same sort of pattern: walk past Parkhouse Hill, down a short decline, across the road, then up a sodding great hill on the other side. Once up, though, it’s more straightforward… meandering over stiles and walls into Earl Sterndale was quite simple.

You can stop for a pint at the Quiet Woman if you like, but we turned back on ourselves almost straight away and wiggled our way back to Longnor.

This is when we found all the sheep that had come out with their lambs, so all I can really remember is a lot of baaing. Oh, and the final hill into Longnor, near the sewage works, is a total bastard. The sewage works themselves are inoffensive: the incline needs a damned good hiding though. You end up coming into Longnor near the Cheshire Cheese pub, which is probably quite nice except it was full of cyclists, and they wanted a fiver for a cheese baguette with some days old salad they’d failed to disguise with balsamic vinegar. Huh, what do they think we are, tourists?