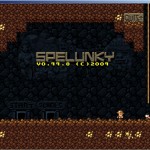 It’s a lot like Dungeon Crawl (and/or Stone Soup) in that regard, and for one of the same reasons: the game map changes each time you play.

I could probably bang on about procedurally generated levels or something, but I won’t because I don’t understand the technology. All that matters is that levels are different every time you play (strictly speaking it’s like all Roguelikes in that regard, but Crawl in particular for me in terms of style and deadly humour).

However, while the level layout changes for every game, the aim of the game and the insane, old-school difficulty remain the same.  It looks a plays just like the platformers I dimly remember from my 8-bit days. It has simple, functional, retro graphics; even more retro sound, creating using the very funky sound generator, SFXR; and very retro gameplay. It was made using Game Maker from YoYo Games.

There are a few issues (it’s still in Beta) and the control scheme isn’t quite perfect, although to be fair neither is my joypad. Regardless, Spelunky is a cute, compelling, evil gaming experience that reminds me  just how fecking difficult games used to be. Best of all it’s free, so go play it and worship the author, one Derek Yu.